Some days are better than others in the hunt for a good image. Yesterday, for example, I half-heartedly went out to grab some snapshots of the daffodil fields, primarily to let fellow photographers who are not in the area know what the blooms currently look like. I only had a few minutes and the light was really harsh. The fields weren't at their peak and, to be honest, I wasn't that enthused. Luckily, while I was by the side of the road shooting I looked up to see an adult tricycle peddling my way. It was a friend I'll call "Farm Girl."  Farm Girl is funny and smart and sweet and knowledgeable about farming.

As we chatted by the side of the road about the follies of tourists coming to our area this time of year she told me a story about a couple she saw one year. Apparently they were hell bent on getting photos of the woman, who was, by the way, wearing a tutu, running through the iris fields. They were so intent, or so ill informed, they did not even notice the sprayer who was just finishing up his application of pesticides on the fields. Yes, tutu woman ran out into the freshly - sprayed fields. Farm Girl yelled at her to get out of the field. She pointed to the pesticide applicant - who was wearing full body protection from the pesticides. Tutu woman took a minute to get the implications, but she did, finally, leave the field of blooms. Fields of flowers seem to make people stupid.

Which leads me to this morning. When I left the house the sky was blue and crisp. I just wanted a few good shots, and I wanted to see if the swans I spotted yesterday were in the same spot this morning. 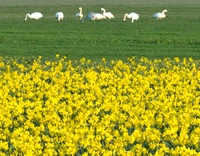 I should have just gone back when I noticed the clouds rolling in. Instead, I drove over to where I had spotted the swans. I don't have a long lens, so I really can't get a good shot, but I thought I'd look through the lens anyway. As I pulled over I spotted a curious little fellow looking at me. 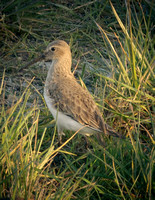 He was right next to my car and wasn't moving very much. Just watching me. A little unusual, but I thought it a nice opportunity to get a picture.

When I got out of the car and started to walk across the street to the daffodil field, I realized what was going on. I was at the scene of a family disaster. There were two large birds dead in the middle of the road.  One was unrecognizable, but the other could have been peacefully sleeping.

There was another, smaller bird, dead on the side of the road.

Then, the little guy who had been eyeing me started to walk. It was then I saw that his wing was wounded and he could not fly. I tried to catch him, but he was too fast. Sadly, I had to let him be.

I realize this is just Nature and I should let things take their course, but I have a hard time understanding how three birds could have been hit by a car or truck on this deserted farm road. Someone was driving really fast - or they were distracted by the daffodil fields. Fields of flowers make people stupid.

After that, I decided I would rather work in my garden today than take any more pictures.