From Observer to Activist - How Photographing Raptors Changed My Path

When I went to a presentation on wildlife photography by Tom Mangelsen, at the invitation of a friend, I had no idea how it would change me, but if anything is testament to how photography can move a person, my experience following that class is.

The short story is this - I had never heard of Tom Mangelsen. I was a photographer, but wildlife photography wasn't even on my radar.

I had always supported nonprofits that work to protect wildlife, had dreamed of helping big cats in Africa when I was a kid. (I had even written to the "Born Free" folks, George and Joy Adamson, about helping them. I remember the disappointment I felt as a 12-year-old when they wrote back and suggested I donate money.) So, I had a burning interest in wildlife conservation early on, but like many childhood dreams, I had long since set it aside.

So I attended Tom Mangelsen's  Creative Live class in person, with my friend Kamriell Welty. At the end of his presentation he casually mentioned that he was one of the instructors in an upcoming wildlife photography workshop being offered by Photography at The Summit in Jackson Hole, WY. Kami and I discussed it and decided to go. When the time came, she was unable to go, so I went alone.

That was a few years ago, and I enjoyed it so much I returned one more time to repeat the workshop. Classes are taught by some very impressive National Geographic and conservation photographers, including Michael Forsberg, who has used his photography to raise awareness about the environmental threats to the great plains. As much as anyone, Michael got me thinking about my own backyard when he gave a compelling presentation about the sandhill cranes of the Platte River in Nebraska. His clear love for the place where he grew up lent an authenticity to his presentation that was deeply moving. Seeing it through his eyes forever changed how I think about the great plains.

After that first workshop, I set out to learn more about our local wildlife - particularly the birds. I took a class from Bud Anderson, who is our local raptor expert, and learned that we have an extraordinary variety of raptors in our area each winter. Through his deep knowledge and his own passion for birds, Bud has moved many a person to become involved in raptor research and observation. I have also repeated that class. 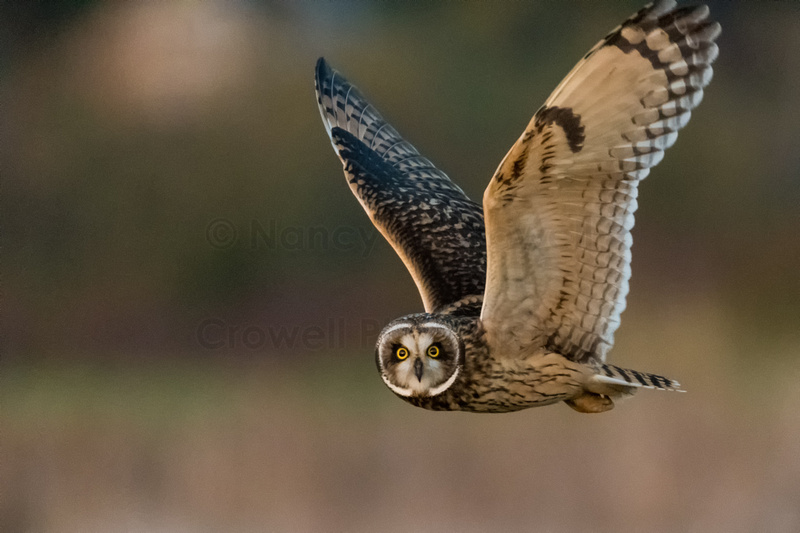 Short Eared OwlClose encounters with raptors, such as this short-eared owl, gave me new appreciation for the challenges they face. 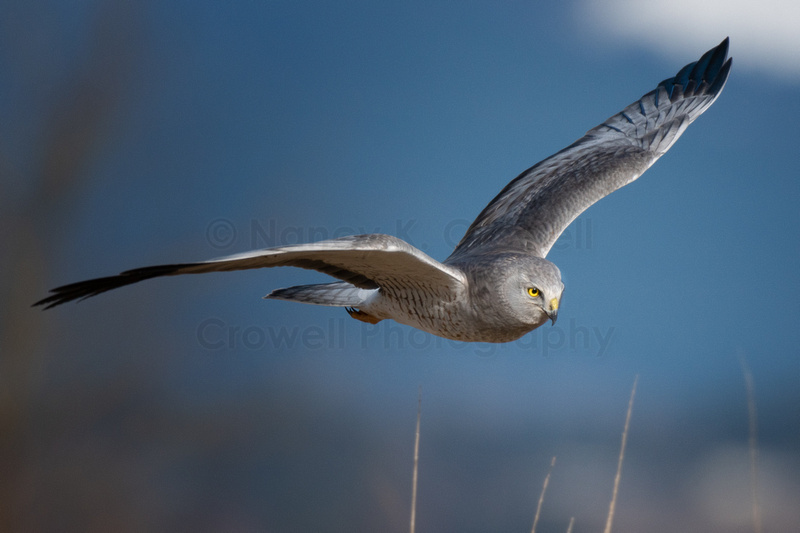 Northern Harrier HuntingThis male northern harrier, also known as a gray ghost due to its gray color, will spend hours hovering low over open fields to hunt, and then often must fight other raptors to keep its meal. 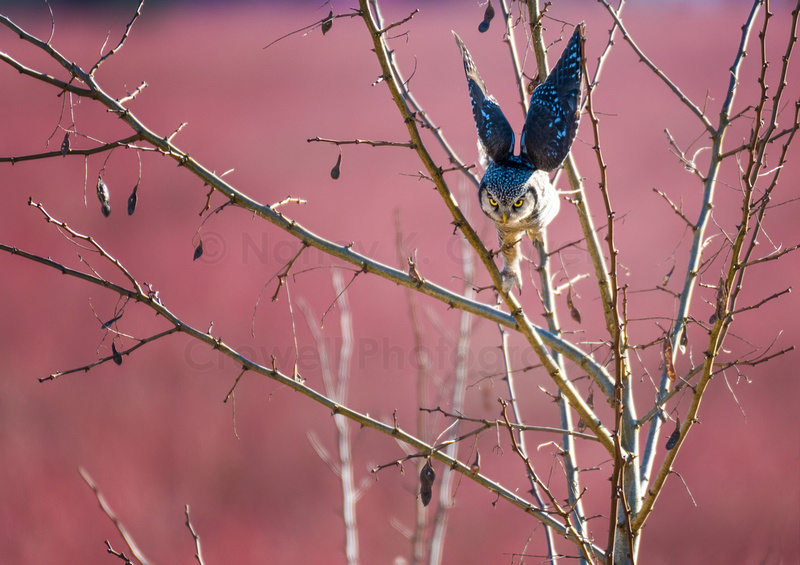 I got to know a few amazing wildlife/bird photographers. I took more photos.

I started getting attached to the birds I was photographing and worrying about their survival. It's hard to be a detached observer when one is privy to intimate moments in a creature's life.

I learned that one of the greatest threats to raptors is the widespread use of anticoagulant rodenticides, which impact not only raptors but other wildlife that feed on rodents - even cougars - and kills them. It's a hideous way to die - slowly bleeding internally. I learned this because one of my friends lost an entire family of barn owls due to eating poisoned rodents.

Since I started taking photos, friends who are lifelong birders have begun reaching out to me - sharing locations of birds they would like to see photographed. There's an amazing network of people who share a passion for birds and I am grateful to have so many patient teachers. I am still not good at identifying birds. I have so much to learn.

This year I was invited to photograph a great horned owl nest in a friend's yard. When I first visited the mom was just sitting on the nest. Within a few weeks there were little fuzzballs poking their heads up. I went by every few days to watch and photograph. At some point, after they had hatched, the father stopped appearing, which left all the feeding to mom.

There were three owlets. One fell out of the tree, as is common, and hopped away. We never saw it return. We don't know what happened to that owlet, but the nest was in a neighborhood that borders rural housing and fields - places where people often use rodenticides.

Great Horned Owl watching her owletsI watched and photographed these great horned owlets for a few weeks before a third baby popped its head up.

I shared photos of the owlets and their story as it unfolded. People seem to universally love owls. My baby owlets had fans-people who wanted updates. It occurred to me if I could share what I have learned about the way humans endanger their lives, maybe, just maybe I could make a small difference.

And then there were threeHow could anyone resist these muppet faces? I became emotionally attached to these owlets as I watched them grow. That attachment is partially responsible for my wanting to find a path toward ending the use of anticoagulant rodenticides to kill their prey, as it will also kill them. 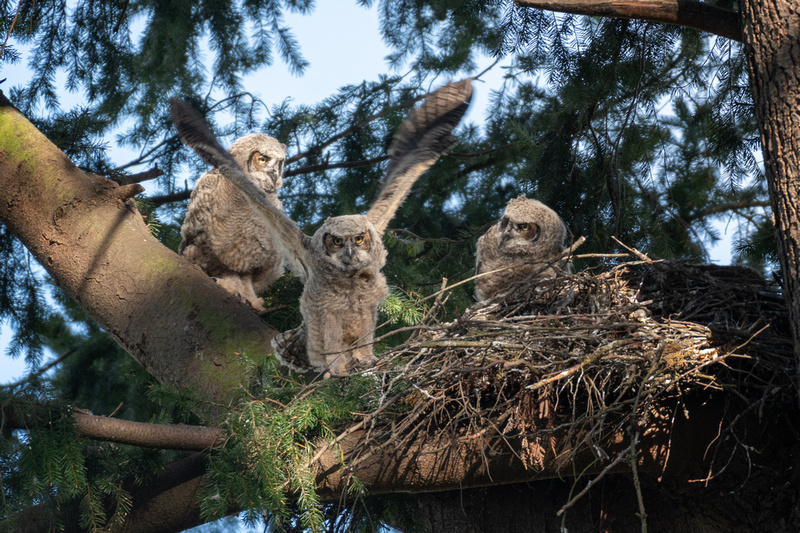 Great Horned Owlets Starting to BranchWatching these owlets grow up and branch has been a joy and a wonder. One fell from the tree and was never seen again. The remaining two are now flying and are seen occasionally in the same area.

Missing Piece of the Puzzle

I am a purpose-driven person. I really want to contribute to the greater good. I always have.

When I read that California had recently passed a bill banning anticoagulant rodenticides this year (it's not yet a law), I started asking around to find out if anyone was working on this in Washington state. What I learned is that a lot of people are gathering data - doing necropsies and collecting information on how many of our raptors are killed by rodenticides, or have them in their systems. But no one has made a serious effort to get the law changed.

What could I do? I'm just one person. My friend Melissa Groo, who gently and persistently uses her photography to advocate for wildlife, directed me to the people behind the California bill - Raptors Are The Solution a.k.a "R.A.T.S.". When I talked to Lisa Owens-Viani, the co-founder of R.A.T.S., she told me they had been wanting to open a Washington chapter. And that's where we are today.

I am wading in to unfamiliar territory with my eyes wide open. I believe with enough support, we can make a change, but I am not naive enough to think that I can do it alone, or that it will happen overnight. I am not a National Geographic nature photographer. I am a writer and former magazine editor, but I have never written about wildlife. I don't have a biology degree.  I'm just a person who loves where she lives and would like to protect our existing wildlife.

I am reaching out to all the people I know who have been working for so long to help raptors in our state survive. Through the main organization in Berkeley, CA, I have access to excellent educational materials to distribute. I know there is a long road ahead, but I'm willing to follow it. If I can stop one person from using anticoagulant rodenticides, that person may stop another.

I have created a Facebook page for people to connect with us, so please go like our page.  I will post updates to the page as the story unfolds. For now, I am just starting to work on awareness and education. It takes a long time to create change, and I know that. But I think people fall into two camps -  those who wring their hands in frustration, and those who step up and try to do something. I land in the second camp. I hope you will join me.