I had not planned to photograph this year's total eclipse. I have a small spot of damage on one of my eyes that my doctor suggests is from viewing an eclipse when I was younger, and I'm very careful about my vision. So, I kind of dismissed the whole total eclipse thing.

And then I read this article by one of my all-time favorite authors. It gave me pause. Then, I heard this podcast and my curiosity was piqued even more. Finally, one of my brothers called and asked me where I planned to view the eclipse. That was it. I needed to find a place and it was less than two weeks away!

Fortunately for me, I have a very good friend who recently moved to Portland, OR, so when I texted to find out what her plans were for the eclipse she just responded "Come on down! It will be fun!"  What I didn't know, but found out before I left, was that we were going to spend the night at a winery owned by friends of hers. As it turns out, St. Josef's Winery is located in Canby, OR, which fell within the path of totality. Lucky me! 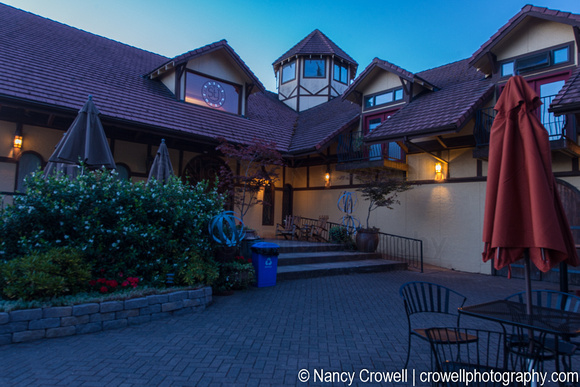 My next step was to do some research on photographing the eclipse. I read several articles, but the best advice I got was from some friends who are diehard umbrafiles. This eclipse was to be their 10th solar eclipse. Their advice? "Something always goes wrong with the photography. Don't try to fix it. Just stop and watch the eclipse because you need to enjoy the experience!"

They also shoot Nikon, so they gave me some specific settings for my camera. I had ordered eclipse glasses in time, but I also ordered some mylar solar filter material to make a filter for my camera. Although I wanted to capture the various stages of the eclipse, without a tracking device on my tripod, I knew it would be hard to create a decent composite from those images. I made my filter so that I could easily slip it off the lens at totality because you don't need it during totality and that's what I really wanted to capture, if I were going to get any photos at all. 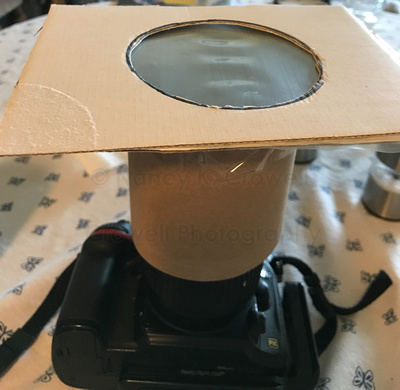 Solar FilterI made my solar filter the night before the eclipse. The day of the eclipse I had to make some adjustments because the tube was a little too tight for my longer lens.

The day before the eclipse was completely overcast. As a macro flower photographer, I am thrilled with those conditions when I have something to shoot. Fortunately, Canby is the home of Swan Island Dahlia farm. Dahlias are one of my top favorite flowers to photograph! We went to the farm and I spent hours walking around, shooting photos. The conditions were perfect. Overcast skies, no wind. I was in heaven! 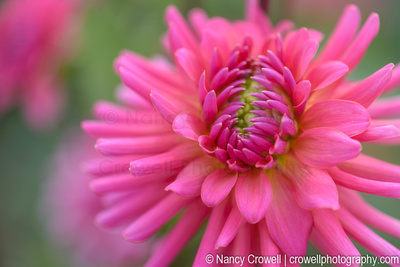 Dahlias bloom in AugustOne of the thousands of beautiful dahlias I photographed at Swan Island Dahlias farm in Canby, Oregon. 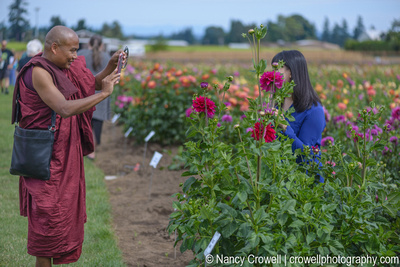 People from all walks of life enjoy dahlias!I was photographing the flowers, when I looked up to see this monk shooting a picture of a friend on his phone.

That night we stayed at the winery and enjoyed a fire out under the stars. The next morning I got up to watch sunrise above the lake, and was thrilled to see there was not a cloud in the sky. The conditions could not have been better. I set up my tripod at a spot I thought would be good for shooting the eclipse, and was conveniently close to my car so I could access my equipment. St. Josef's only sold tickets to about 100 people to watch the eclipse at their location. The tickets included eclipse glasses, mimosas and a pancake breakfast provided by a local food truck. People who chose to view the eclipse here were friendly and relaxed. A handful of other photographers showed up and set up right next to me. I called it "Geek Row" because we were all sharing what info we had and talking about equipment. I was in my happy place! Mimosa in hand, camera set up, waiting. The winery had live music. It could not have been a more blissful morning. 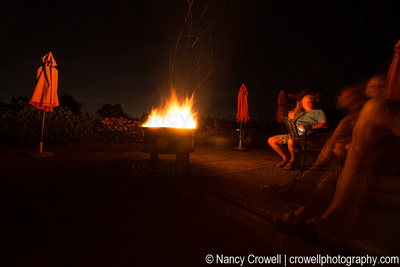 The Night BeforeFriends hanging around the fire at St. Josef's winery in Canby, Oregon the night before the eclipse. 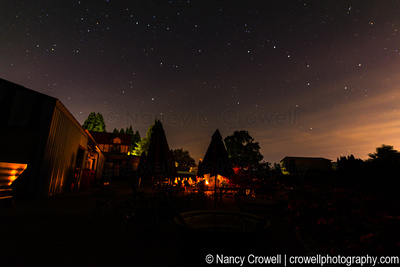 The Stars Came OutAs friends enjoyed the fire, I stepped back to view the stars. 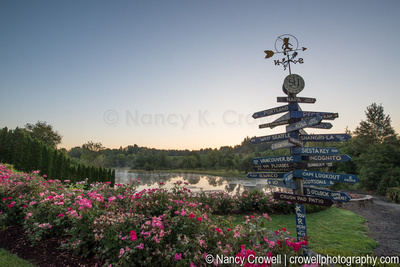 Morning LightJust before sunrise on August 21, 2017. 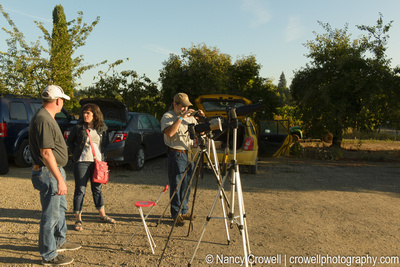 Geek RowFellow photographers get set up next to me. 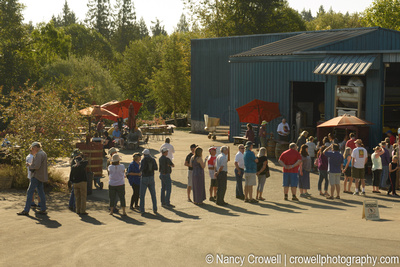 Pancake LinePeople line up for pancakes before the eclipse.

Flying PancakesCheers would rise from the crowd every time the pancake chef flipped a pancake into the air for a hungry patron to catch on their plate. 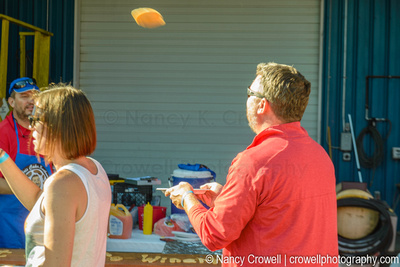 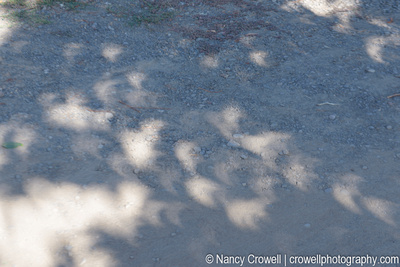 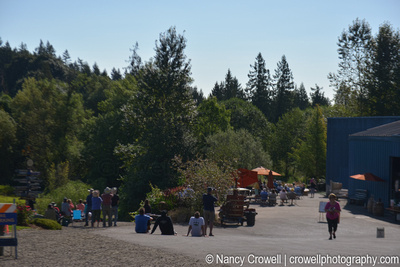 The Lights Begin to DimPatrons watch as the sky begins to dim with the eclipse. 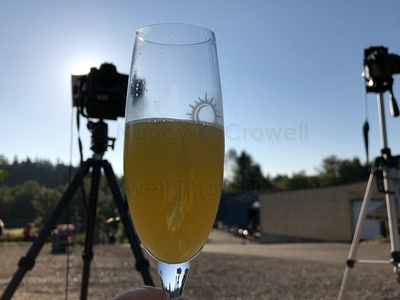 Ready to ShootMimosa in hand, camera set up, I am ready for the eclipse to begin!

When the eclipse started, I started taking pictures. I got quite a few of the shadow taking bites out of the sun, but they aren't really very interesting compared to the totality. We only had 54 seconds of totality - so I was nervous as it approached. Just before totality I took my filter off my lens, reset my ISO to 800, locked my focus, set bracketing on my shutter and crossed my fingers. I had no idea if I was going to get anything. I shot pictures for about 30 seconds - enough to cover Bailey's Beads, the Diamond Ring and the corona. I couldn't really tell if I even had the sun in the frame of my image, as I had been shooting with my prescription sunglasses on but when totality arrived I couldn't see! That was the one thing that went wrong for me - I left my regular prescription glasses too far away to switch at the moment of totality. Oh well. I fiddled with my camera, shot blindly and then looked up at the sun. Oh my! The corona was shimmering and shining around a big black dot in the sky! It was amazing! The birds were quiet. The animals were quiet - but the human animals were gasping and making sounds of awe and wonder. And then, it was over.

When I flipped through my images afterward I could tell I had gotten the diamond ring - considered the 'holy grail' of eclipse photos. I had no idea I had also captured the corona - with the star Regulus showing! I didn't see those images until late that night when I got home and downloaded what I had shot. 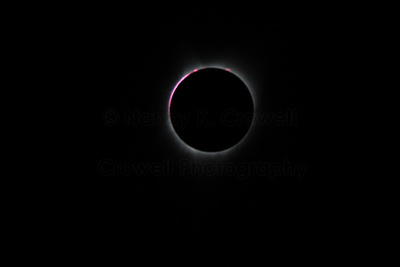 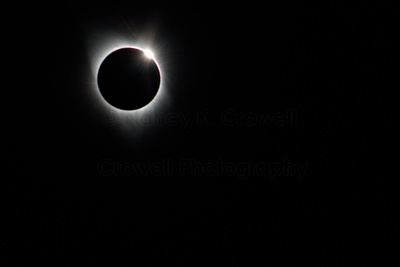 The Diamond RingThe 'holy grail' of eclipse photos - known as the 'diamond ring' when the first sun rays start to appear behind the shadow. 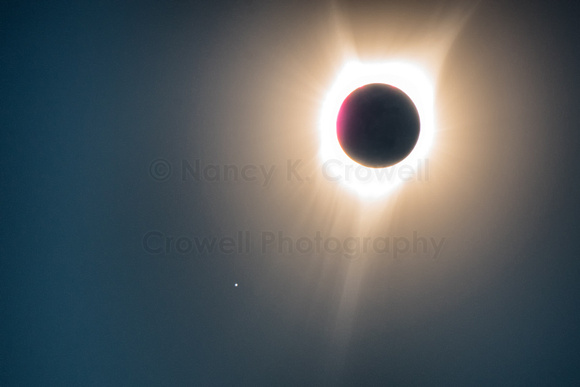 The CoronaI didn't even know I had successfully captured the corona till I got home that evening. The small dot in the bottom left is the star Regulus.

Am I glad I went? Abosolutely! Will I try to see another total eclipse? You bet. I completely understand why umbrafiles chase the eclipse around the globe hoping for more. In fact, it looks like the 2024 eclipse in the U.S. has a whopping four minutes of totality along the center of the path. I think I'm going to have to make some plans. . . In the meantime, you can view my favorite photos from this year's eclipse in this gallery.