Seems like a hundred years ago that I worked in a portrait studio. The work was fun, but I often thought of a line a photographer I know used when shooting portraits. He liked to say, sarcastically, "I'm a photographer, not a magician!" Of course what he meant by that was that the camera doesn't lie and no matter how much you wish you looked like Elle McPherson, if you don't, you won't look that way in the portrait.

It's true that one can use Photoshop to really change an image - such as the controversial Justin Bieber Calvin Klein ads. However, most people don't have or use Photoshop and aren't likely to start using it anytime soon. So, I thought I'd offer up a couple of quick tips for how to make your portraits better - even if you're shooting with your phone.

I don't shoot portraits anymore, so I don't have a lot of images to share, but I will offer links to examples to illustrate my points below.

1. Focus on the eyes. As humans, we connect through our eyes. If nothing else in the photo is in focus, at least make sure the eyes are sharp. It's the first place people will look.

2. Don't be afraid to get really close. Portraits are about connecting. Why stand 30 feet away when what you really want to see is the expression on your subject's face? Take one picture, then step in closer. Shoot another picture and compare. If you're still not close enough, try again. You want to connect. Don't hold the subject at arm's length! Many photographers think an 85mm lens is the perfect portrait lens. I think it's most important, though, to simply get close enough to make your subject compelling, but not distorted.

3. Pay attention to the background. Sometimes you want background for context - especially when you're capturing a travel photo. "Here we are in Italy!"  - you want to see that coliseum behind the subject so the context makes sense. If your background isn't central to the picture, though, try shooting at a wider aperture (f4) to create a shallower depth of field. This will blur the background and draw people into your subject's face. Look for weird lines/objects in the background before snapping the picture. How many photos have you seen ruined by a telephone pole or lamppost sticking out of someone's head? (Even if you are shooting with a shallow depth of field, as recommended above, harsh lines can be distracting.) Sometimes the easiest correction is to move one step left or right of the subject to get a neutral background.

4. The sun is your friend - when it's at your back. How many photos have you seen of people squinting into harsh sunlight? Don't be afraid to put the sun at the back of your subject. It will highlight their hair, giving them a beautiful 'glow' or 'halo' effect. There are plenty of programs available today to tweak your image after shooting so that the dark shadows on a face can be opened up and you keep the sunlight as a background. You can also use almost anything to simply reflect light into the subject's face - a piece of white paper, a hand-held reflector, even a windshield protector (popular in the South where the sun bakes cars.) Play with the reflector to see how it bounces light into your subject's face and eyes. At the very least, try shooting your subject turned 3/4 away from the sun, with light hitting one side of their face and creating a triangle of light on the other side (basic "Rembrandt" lighting). While classic Rembrandt lighting is easily created in a controlled, studio setting, you can come close to creating it in an outdoor setting by simply positioning your subject in the correct angle to the sun. Any of these options will be better than squinting into the sun.

5. Overcast skies are your friend. If you think you have to shoot on a sunny day, you're wrong. Cloudy or overcast days can create some of the very best lighting for portraits, as they create a nice, soft, even filter that removes harsh shadows. Seriously. Just look at the difference between a portrait shot in bright sunlight vs. one shot on a cloudy day.

There are plenty of other 'tricks' portrait photographers use to make their subjects look better, but these five basics will help you improve your snapshots and family pics immediately. People who have had their portraits taken by professionals will pick up some tricks for hiding their double chins and looking slimmer. When you're shooting friends and family, you really just want to capture their essence - spontaneous images are always the best. Just keep the above in mind when you do so and I promise you'll be happier with your results.

Here's a portrait of my husband shot while we were in Venice, Italy. I love this image of him because it takes me right back to that balcony as if I were standing there. In this case, I really wanted the background to appear, as it's central to the purpose of the photo. The cloudy skies worked well and cast a soft light on his face, with just a bit of light bouncing off it in all the right places. I didn't pose him - I simply caught him looking out at the canal, watching the boats go by, proving you don't need a fancy set up or camera to get images you will treasure. 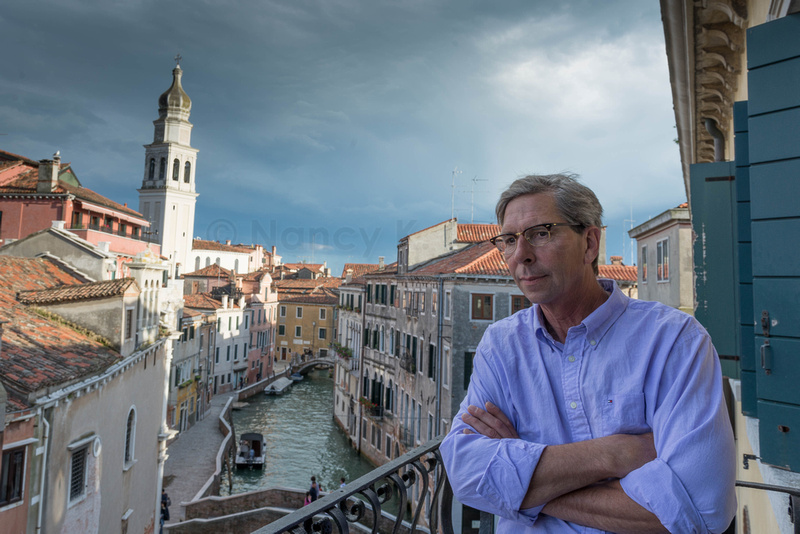 Michael in VeniceOvercast skies created soft light highlighting my husband's face as he gazed off our balcony in Venice. It's not a formal portrait, it's not perfect, but it captures a moment that takes me back to that location.