Getting the Whole Picture

Getting the Whole Picture

A couple of weeks ago I took a two-day course from award-winning landscape photographer Tom Mangelsen. Because we were a studio audience for a live broadcast, some of the course was pre-shot in the field with Tom.

The pre-shot footage was interesting, but more interesting to me were the audience reactions to that footage. In the footage Tom takes a handful of students out into the landscape and assists them in getting the types of photos he likes to take – magnificent vistas with wildlife in their natural habitat. Not only was he able to describe to the students what animal behavior they would observe, but he taught them something about predictive observation by knowing their subject. He could tell them, for instance, when a male elk was likely to stand up and move based on where the females were. These insights were a revelation to the audience. People were genuinely surprised at the things he was thinking about when shooting.

It was obvious from his running monologue that he is deeply knowledgeable about his subject matter – and he sees the whole picture. Tom’s big on framing within camera, and not doing a lot of post production editing. Knowing one’s subject and being able to anticipate movement is a huge advantage for him.

I am completely on board with this approach. Who wants to spend a lot of time at the computer, editing?  It’s the act of shooting pictures that is more fun.

Another thing Tom was able to do while shooting was talk through his ideas regarding what fstop, ISO and shutter speed he was using and why. He also made mistakes and talked about those. Sometimes when you are in the heat of a particularly photogenic moment, it’s pretty easy to make mistakes. I’ve certainly done it myself. Those are precious learning moments. You may not get the shot you wanted, but you won’t miss it the next time! And if you are observant, there really will be a next time.

One shot I get asked about a lot is this image of a California poppy with light streaming through the stem. When I have it displayed at shows I often hear people say “That was definitely ‘shopped!” – meaning they believe the image was Photoshopped.  My response – “if I could use Photoshop that well, I wouldn’t need to take pictures!” Seriously, though, like Tom, except for certain images, I rarely touch a photo in Photoshop. I find Photoshop challenging to use, so I avoid it most of the time. I do some basic optimization in Lightroom and call it good for most things. 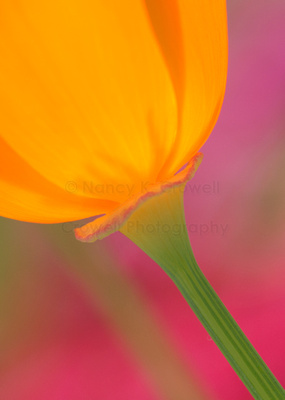 California PoppyClose-up of a California poppy with sunlight streaming through its translucent stem.

But back to this poppy. This is an instance of composing in camera and getting the shot. I was actually on location to shoot bamboo, as this place had a wide variety of bamboo stands. And I did shoot some images of the bamboo, but they weren’t working for me. Out of the corner of my eye I saw a bright spot of color – and small patch of poppies in the sun. I resisted at first, thinking I was really there to shoot bamboo, but, fortunately, realized this was an opportunity I ought to pursue. I walked over to the sunny patch of poppies blowing in the gentle breeze and I started shooting. I took my eye away from the viewfinder and saw there was a patch of brilliant pink flowers behind the poppies. I knew if I could find the right poppy and get myself into position, I could have an unusual and bright background. And this image is the result.

I have a number of other images in the series that are just fine. This one stands out because of that unusual background – and it’s likely the background that makes people think I did something in Photoshop. I didn’t. This is how the image looked through my viewfinder. I just looked for the whole picture. Sure, I could have used Photoshop to remove the ghostly stem of the other poppy in the background, but I opted to let it be because for me it captures the movement and the ethereal reality of the moment. Some people might prefer the image without that distraction. That's okay by me - everyone is entitled to their opinion, and to capture the image they see.

So, that’s my simple tip for improving your own photography. Don’t just look at your subject matter. Look at the background. Decide if you want that background in focus (if so, shoot at a higher depth of field, such as f8, f11, f16). If you want the background blurry behind your subject, shoot at a shallower depth of field f2.8, f4, even f5.6. If you don’t know the difference, shoot the same image in sequence – go from one extreme fstop to the other and then look at the difference in the images. The more you do this, the more you will begin to understand how to get the image you want to capture, whether you are shooting a landscape, a portrait, or a macro shot of an insect.

What do you look for when you shoot an image? Are you seeing the whole picture?