Behind the Yellow Door

Over the past four months I have been working on a project that forced me to move away from home for a few weeks at a time. Fortunately, I had friends that invited me into their homes and let me invade their space.

One of these friends was an extraordinary woman I actually only knew through Facebook.  We had been put in touch by mutual friends who knew we had a lot in common, and we had corresponded for more than a year, but never met face to face before I showed up on her doorstep with suitcase in hand.

I spent more than a month living with Carrie Brown and therefore she deserves her own blog post.  I am so appreciative of her kindness and generosity, and was so amused by her ‘family’ I just have to share a bit. 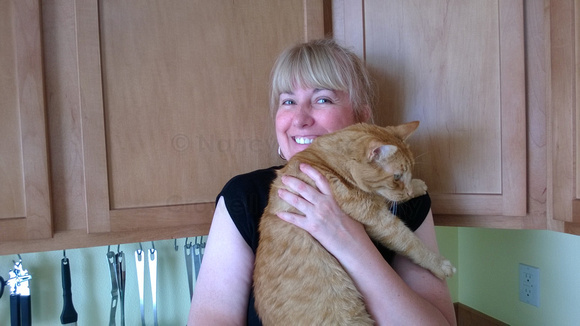 Carrie has her own, ever-expanding, set of rabid fans. We were introduced by friends because we are both photographers who happen to love our macro lenses and often shoot the same subjects. But photography is the least of her talents. Carrie is one half of one of the most popular podcast series on iTunes. She partners with Jonathan Bailor on The Smarter Science of Slim. Just investigate.

She’s written (so far) two cookbooks, and I have no doubt she’s already working on the next two.

So here’s the thing. Carrie lives in a non-remarkable development in a fairly vanilla subdivision. But you know Carrie’s house because she’s the one with the yellow door! And that yellow door is the first clue that she is a non-conformist.

Carrie shares her space with five, six felines. Yes, that’s right. Six felines. And that meant I had to befriend them all. Not a problem – I actually like cats.

So, here’s a little bit about Carrie’s family. 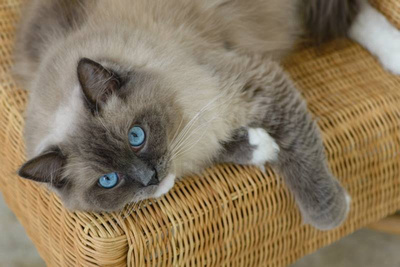 DaisyFormerly queen of the roost, Daisy's authority has been supplanted by newcomer Mr. McHenry. She is not happy about it.

Daisy – was queen of the roost until Carrie brought in a new kitten, Mr. McHenry. Daisy was not happy about being displaced and her blue eyes looked accusingly at you every time you cooed over the kitten. 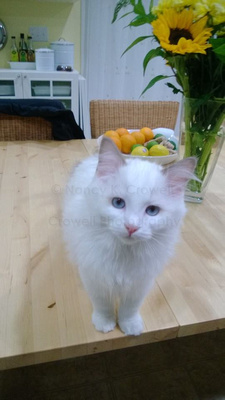 McHenryMr. McHenry didn't take long to establish the power seat in the house.

Mr. McHenry, being a kitten, naturally disrupted Daisy’s special status and incurred her wrath early on. I hear they get along now. Of course he's a lot bigger now, too. 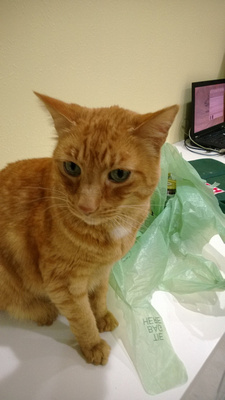 DougalDougal likes to be at the center of the action -especially if there's a lap available. He greets you at the door like a dog would.

Dougal. He’s the lover – greets you like a dog. Wants to be petted all the time and is a lap hog. He’s not picky though – anyone’s lap will do.

Penelope (a.k.a. LooLoo) – the pretty girl who has aged. Sometimes a bit persnickety. Likes to suck her thumb. Really. 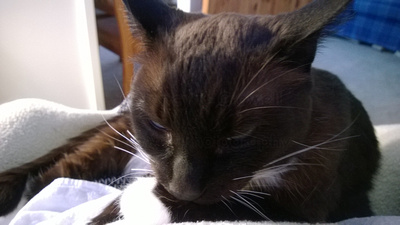 LuluPenelope defaults to thumb sucking whenever she is stressed. 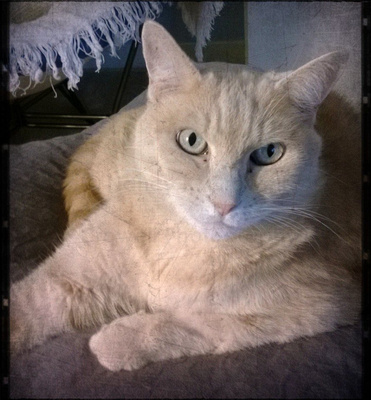 ZebedeeThe original scaredy cat, ZebZeb is only friendly when you sit on the leather couch. Then you become just another lap.

Florence – the slow one. Florence, as you will know if you read Carrie’s blog, loves boxes. It’s true. I’ve witnessed it in person. She also loves dairy. If you even reach for a yogurt or cheese, she suddenly appears at your feet. Most of the time she doesn’t move much. 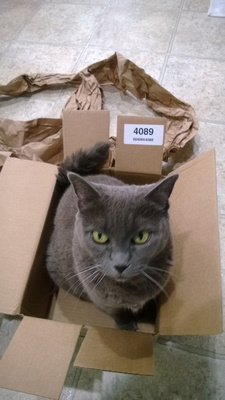 FlorenceIt doesn't matter if it's too small, if there's a box, Florence will be in it.

The cats and Carrie have an understanding. I have never seen such well-behaved cats. Well, I’ve never seen cats that actually behave. Carrie has trained them to come when she whistles, to retire to their garage beds in the evening, and not to whine when food is being prepped. It’s actually a very orderly house.

If you are British (like Carrie) you may recognize these names from an animated TV show Carrie tells me became a cult hit in the UK. It's called The Magic Roundabout.

I have always been an animal lover, and have had my fair share of pets. I admit, though, it took a while for all six of these fabulous felines to adjust to my presence in the house. Once they did, though, we all got along famously.

Thank you, Carrie & family, for inviting me into your world.