This past week I had the pleasure of seeing the new Gaugin exhibit at Seattle Art Museum. I love seeing familiar artwork in person and this exhibit was particularly entertaining because it attempts to show something of the native art of Polynesia that might have influenced Gaugin. The curator of the exhibit spoke to us before our guided tour and she mentioned several times the influence of photography on Gaugin's artwork.

This got me thinking about how one form of art can inform another. It made me think of the relationship between Georgia O'Keefe and Alfred Steiglitz. If you don't know their story, it's worth reading about them. Steiglitz did a lot to 'legitimize' photography as a form of art.

One thing that struck me about both Gaugin's paintings and Georgia O'Keefe's paintings when I saw them in person was how small they actually are. I had seen their work in the form of posters and prints for so long that I expected them to be larger than life. In fact, many of them were surprisingly small and delicate. I was surprised by how little paint was on Gaugin's canvases - so light, in some cases, that you could see the canvas through the paint.

A lot of friends have told me my images remind them of Georgia O'keefe's paintings, no doubt just because of my subject matter. I have not made a conscious decision to mimic her vision. I am, like most folks, just expressing what I see. The fact they say it reminds them of Georga O'Keefe probably says more about the broad exposure to her work than anything about what I do. 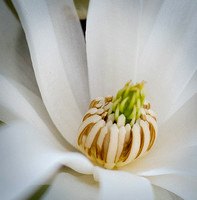 But that brings up a point. I think it's important to look at the work of other artists - painters, sculptors, potters, photographers - whatever inspires you. I have had many photographic and artist heroes throughout the years. When I was in college I had an opportunity to study with Ansel Adams, but couldn't afford the cost of the summer course. Do I regret that choice? Absolutely! Is my love of photography diminished for not having taken that road? Not a chance. I have forgiven myself for not pursuing that opportunity in my youth. I know now that even if I had taken that course chances are I would have made the same choices along the way. Back then I was obsessed with being a writer. (I never did write the great American novel, but I did edit a few magazines and get paid to write.)

Another photographer whose work I always admired was Edward Weston and of course his son Brett. Actually, the entire Weston clan seems to have embraced photography and expanded it in so many ways. From vegetables to scenics, to nudes, they have excelled at black and white visions of the world.

I wouldn't begin to pretend my images come close to any of the work created by these amazing people. But, I have looked at their work and admired it and if I walked away with some mental impression of what makes an image work, I have learned something from them. I think that's the most important thing - that one keep looking and learning and testing and trying. Mastering the technology is only one piece of the puzzle. It's just the medium.

What do you think? Who influences your work?